The Segovia social forum joined in to what is now a nationwide tendency known as #spanishrevolution. This protest which uses the theme “Real Democracy now” and which is taking place today all around the country and which has been “Trend Topic” in the social network Twitter now for two days. This protest which began in the Aqueduct square at around 20:00 and finished about an hour latter due to the threat of rain is just one of many other campaigns such as #acampadageneral. These have had quite a bit of national media coverage initiating in La Puerta del Sol in Madrid (#acampadasol). Many other cities across Spain have adhered to this movement. Among these are Burgos, Santiago de Compostela, Zaragoza, Seville or Bilbao. Hashtags like: #nonosvamos #nolesvotes #yeswecamp or #spanishrevolution are creating a revolution in microblogging. Twitter is suffering a frenetic activity on its site as thousands of protesters who gather in the different places around Spain are summoned. The Social Forum already protested coinciding with Titirimundi’s last day by carrying out in several parts of the city their particular way of protest. They characterized human puppets on strings handled by what they consider the root cause to most of today’s problems: politicians and bankers as read on the signs that they carried.

We are fed up with antisocial reforms, left unemployed, that banks which provoked this crises raise the cost of the mortgages to our homes, that laws be imposed that cut our freedom in favor of the powerful. We accuse the political and economic powers of our precarious situation and we demand a change in course. We are against the neoliberal politics and the uncertainty these have condemned us to. We believe that other types of politics are possible. We want answers. With these words the Segovian Social Forum manifested their complaints and joined the other protest which took place in Madrid the 15th of May organized by Democracia Real (Real Democracy) under the theme “take to the streets”. 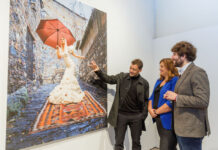 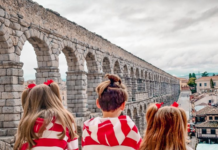