“Cultural Segovia with no expiration date” will be one of the candidate phrases when mentioning the Segovia 2016 project, which will continue to be developed after losing the candidacy for European Cultural Capital last 28th of June. The mayor of Segovia Mr. Arahuetes explained that the future of the project is still to be defined but what is certain is that on a whole it will go on, although without a defined calendar.

The Segovian musical group “Mester de Juglaria” requested permission from the City council to alter the phrase used in the logo in one of its acts during the festivities of “San Pedro” last month so as to show their support for the Segovian candidacy just a day before Segovia lost to San Sebastain.

Once the permission was given by the City council, it was the coordinator of the 4th edition of “Vete al Fresco” festival Fernando Martin who after watching the Mester de Juaglaria concert said before the media: “it’s a phrase that says a lot and goes well with the logo”. He too has asked permission to turn the phrase into one of the ambassadors of this festival which brings together the best of gastronomy and of music to all the neighborhoods in Segovia.

Regarding the 2016 Office for Segovia, Mr Arahuetes clarified that all contracts will end once the decision was made and another city won. “The office had a goal and it has reached it, therefore it’s time to prepare for another race”, to which he added “if the personnel stay or not in the council it’s a decision which will be taken in the next few weeks, depending on availability and economic parameters”, although he assured that the salaries would be lower. 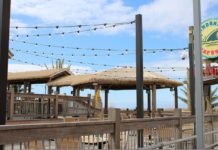